Our Lady of Lourdes 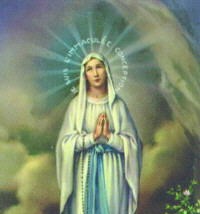 The apparitions of Our Lady of Lourdes began on 11 February 1858, when Bernadette Soubirous, a 14-year old peasant girl from Lourdes had seen a “lady” in the cave of Massabielle, about a mile from the town.

She saw a light in the grotto and a little girl, as small as she was, dressed all in white, apart from the blue belt fastened around her waist and the golden yellow roses, one on each foot.

On 18 February, she was told by the Lady to return to the Grotto over a period of two weeks.

The Lady allegedly said: I promise to make you happy not in this world but in the next.