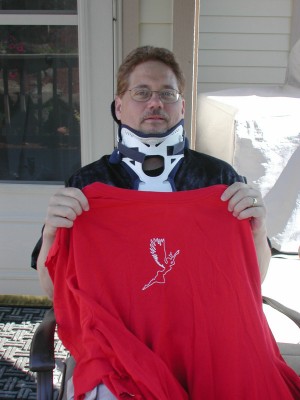 Before I married my wife Becky, who is Catholic, I was raised as a Methodist. After several years of receiving Communion in a Catholic church, I was told that I was not allowed to take Communion because I was not Catholic! More out of frustration than anything else at the time, I joined the Church. I was so busy with my life and was so marginal at both being a Methodist and a Catholic that I could barely tell the difference. My life was all about working in a dog-eat-dog high-tech company for 50+ hours a week and was full of stress and anxiety. Then, after twenty-five years of living in a pressure cooker, the lid flew off.

I was mountain biking in the woods in eastern Oregon when I had a life-changing accident. I was traveling downhill fast when my tires hit a hole and I flew over the handlebars and landed on my head. I had broken my C1 (the one Christopher Reeves broke), C3 and C4 vertebra in my neck and my T4, T5 and T6 vertebra in my back, most of my ribs on my left side were crushed, my sternum was broken, and I broke three of my teeth when a stick went into my mouth.

My friend Brian called 911 and we waited for them to find us. I laid there for two hours in excruciating pain, praying the Our Father with Brian and asking God to please get me out of this alive. After many of the rescuers and ER doctors commented that I must have had a guardian angel with me, my wife Becky noticed later, when going through the clothes they had cut off me, that I had a T-shirt with a big angel on the back! Little did I know where that angel would take me.

After eight months of living in a neck and back brace, John, a parishioner friend of mine, asked me if I would like to play guitar for his music ministry group. Even though I had played music in a rock band in high school, I felt awkward because I was not familiar with the style of music, or the actual parts of the Mass. Carol, our music director, had heard that I recorded music as a hobby, and asked me to record a Christmas CD of the parish’s music ministry in just two months. Suddenly, many talented parishioners wanted to record Christian songs that they had written and encouraged me to do the same. After we released our first Christmas music CD, I began to write my first Christian music.

Several friends I knew had been diagnosed with cancer. One of them, Ken, was diagnosed with terminal cancer. Having lost my mother at the age of five to cancer, I began to think about how awful that must be to know your life is going to end in a very short time. I began to write a song titled “Mustard Seed” that was about the power of prayer and how not to worry about your future. The chorus of the song was from Matthew 6: 24-34.

A few months later, Becky’s aunt, Sister Ina Marie, had decided to go to Medjugorje and she asked Jim, my father-in-law if he wanted to go. Becky and I were very concerned that these two elderly people were going to go to Bosnia, and so we watched a video to see what this was all about. In the video, the Blessed Mother had told the children to begin their conversions by reading the scripture Mathew 6:24-34. My mouth fell open and I stood in amazement about not only what was going on over there, but the direct connection to my song that I had just written. I felt this was my direct call to go see what the Blessed Mother was doing in Bosnia. My wife and I quickly signed up with her father and aunt through a Medjugorje pilgrimage organization in Portland Oregon called Center of Peace West.

Before we knew it, we were standing in Medjugorje on a warm June night looking at a sign hung in front of the church saying “25th anniversary.” We could feel the Spirit in the air, beautiful music coming from the church, thousands of people praying. The incredible sound of the people singing in Mass was like nothing I had ever heard back home, but at the same time, I was apprehensive because, after just a short time of playing Catholic music, I was about to lead the music for a Mass at St James parish in Medjugorje!

Our first experience of Medjugorje is beyond this article, but it will suffice for now to say we had more guardian angel and spiritual events. We spent many nights with thousands of people in perfect harmony in the adoration of the Eucharist. Time flew and not wanting to leave, we sadly left for home, but we knew we had been greatly affected by this little town on the edge of Heaven. We spent the rest of the summer reading every Medjugorje book we could get our hands on and painting the messages of the five stones on rocks from Apparition Hill. We started to pray the Rosary daily and I began to discover saints, plenary indulgences, miracles of the Eucharist, etc.

That fall a singer friend of mine, Patti, was diagnosed with terminal cancer. I began to sing “Mustard Seed” to her during prayer groups. After only three months of prayer sessions and the song “Mustard Seed,” her cancer had shrunk to an operable size and she is in good spirits and cancer-free today. Ken, the original terminal cancer patient cancers shrunk to the point that he could be operated on. His spirit was high, in testimony to faith the size of a tiny seed, and he lived for several more years.

Several months later, I was practicing music for a youth Mass that Sunday evening while looking at a picture of the Blessed Mother. I was playing around with an old Bert Bacharach song, “What the World Needs Now is Love Sweet Love,” when the Blessed Mother’s messages started to fall into a song. Every word in this song was from Our Lady’s messages. Before the Mass that night I had written the music and Our Lady had written the lyrics to “Surrender to God’s Love.” I sang it for meditation at Mass that very same night. The song has grown to be one of my favorites. It was sung at a Mass with the statue of Fatima when the statue was visiting Portland, Oregon. I did an interview with MIR radio in Medjugorje about the song on my pilgrimage to Medjugorje last May, and they are playing it on their radio station now. I have sung it to pilgrims on Apparition Hill and they have told me that Mary was smiling.

As an ex-Protestant, I was very taken back by the fact that Mary’s messages were for the entire world. This was not a story about the Blessed Mother, or even Catholics, but it was a message for the entire world to surrender yourself and discover the love of God. I started to craft my movie footage of the experience as soon as I got home from my first visit. I was struggling with how to get this urgent message to the world. When Mary says God loves all souls, she means all souls: Non-believers, all Christians, Muslims, Hindus, Buddhists, and all believers. I wanted my movie to not be just a documentary but to focus on the importance of Her message calling us to God.

During this time my wife had a glorious dream that she was in our church but without its choir loft and she still heard beautiful music like nothing she had heard before. She was joyous but confused. Then a young woman with long hair said they are thanking you! She was then looking down at me painting a scene of Bethlehem on the wall. She asked God what all of this meant and suddenly the doors to the church swung open and the music flowed out of the church like a big cloud into the world.

So even now, though I just lost my job of 28 years, I feel like God’s Providence is in control and Jesus has wrapped a warm blanket around my soul!