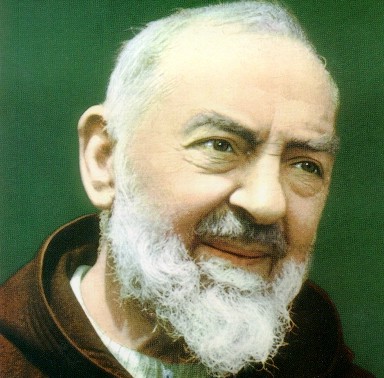 Pio (Francesco Forgione) was born in the little town called Pietrelcina, in Southern Italy May 25th 1887.  He was fifth of eight children. He had celestial visions and diabolical oppressions from the age of five years and he saw and spoke with Jesus and Our Lady and with his Guardian Angel, but unfortunately this heavenly life was interwoven with hell and with the devil.

This very important event occurred in Father Pio’s life on September 20, 1918,  while he was praying in front of a Crucifix located in the choir in the little old church, when a strange personage like an angel, gave him the stigmata. Those stigmata have been remained opened and bleeding for fifty years. This was one of the reasons for which doctors, scientists, journalists and common people have gone to San Giovanni Rotondo for years, in order to meet the “Saintly friar “.

In September 1968, thousands of devotees and Padre Pio’s spiritual children were assembled in conference at St. Giovanni Rotondo to commemorate together the 50 anniversary of the stigmata and to celebrate the fourth international conference of the Prayer Groups. Nobody would have imagined that at 2:30 a.m., September 23, 1968 we the earthly life of Father Pio of Pietrelcina would end.

He had the gift of Bilocation:

Bilocation can be defined as the simultaneous presence of a person in two different places. Padre Pio had this charisma and had been seen by eyewitnesses in different places at the same time. Here are several testimonials.

One of the most remarkable of the documented cases of bilocation was the Padre’s appearance in the air over San Giovanni Rotondo during World War II. While southern Italy remained in Nazi hands American bombers were given the job of attacking the city of San Giovanni Rotondo. However, when they appeared over the city and prepared to unload their munitions a brown-robed friar appeared before their aircraft. All attempts to release the bombs failed. In this way Padre Pio kept his promise to the citizens that their town would be spared. Later on, when an American airbase was established at Foggia a few miles away, one of the pilots of this incident visited the friary and found to his surprise the little friar he had seen in the air that day over San Giovanni.” (Source: EWTN)

In 1946, an American family went from Philadelphia to Saint Giovanni Rotondo in order to thank Padre Pio. In fact, their son, a bombardier plane pilot (during World War II), had been saved by Padre Pio in the sky over the Pacific Ocean. The son explained; “the airplane was flying near the airport on the island where it was going to land after it had loaded its bombs. However, the airplane was struck by a Japanese attack plane. The aircraft exploded before the rest of the crew had the chance to parachute. Only I succeeded in going out of the airplane. I don’t know how I did it. I tried to open the parachute, but I didn’t succeed. I would have smashed to the ground if I had not received a friar’s help who had appeared in midair. He had a white beard. He took me in his arms and put me sweetly at the entrance of the base. You can imagine the astonishment inspired by my story. Nobody could believe it, but given my presence there, they had no choice. I recognized the friar who saved my life some days later while on home leave, I saw the monk in one of my mother’s pictures. She told me she had asked Padre Pio to look after me.”

In 1956, Padre Pio served Holy Mass for Joseph Cardinal Mindszenty of Hungary in his Budapest prison. Someone who had news of the imprisonment had asked Father Pio directly: “Father Pio you have served the Mass to the Cardinal of Hungary, so you have spoken to him! So you have been in jail with him and you have seen him!” – Father Pio answered: “Of course, if I had spoken to him I have also seen him”. He was bilocating.

He had the Gift of Levitation:

In his life, St. Padre Pio was a miracle worker. He also could levitate. On one occasion, St. Padre Pio levitated through the air in order to reach the Confessional without being seen and stopped. He immediately began to receive penitents. A man in the church was amazed how the priest had gotten to the confessional because so many people were outside of his door waiting to talk with him. St. Padre Pio said to him that God made him invisible and he walked on their heads to the confessional.