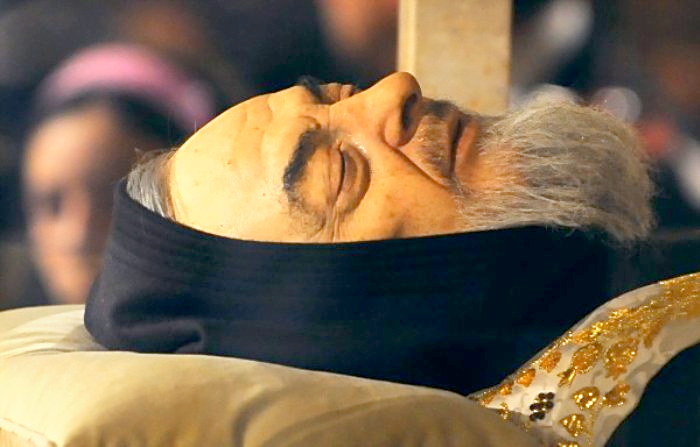 He had the Gift of Perfume:

Sometimes God allows saints to emit a beautiful perfume in order to draw more people to Himself and holiness. This perfume is smelt only by a privileged few, not all. St. Padre Pio had this gift and the smell of roses, incense, ammonia, and others was emitted from him. He said to some inquiring about them: “They are only a sign of my presence.”

Father Agostino of San Marco in Lamis had a malfunctioned olfactory gland and could only smell strong odors. He said, “I smelt a number of times the perfume that many people smell. Even when I was distant from San Giovanni Rotondo I smelt it.” The Gift of Perfume continued after St. Padre Pio’s death. Not just places connected with him but also places in American and distant places of the world smelt the distinct perfume.

The Gift of Light:

On October 5, 125, Dr. Giorgio Festa operated on St. Padre Pio for a hernia. Before he had to stitch the wound, the doctor noticed St. Pio had lost consciousness. He took advantage of this and look at his left side – the place of Jesus’ wound from his stigmata. And, he was the wound was “fresh and of a vermilion red and in the shape of a cross…From the edges of the wound emitted small but unmistakable rays of light.” Dr. Giorgio put on the bandage and St. Padre Pio regained his senses.

Miracles are always divine. For this reason, Padre Pio invited people to thank God, the only source of miracles.

A woman said:  “My first daughter, who was born in 1953, was rescued by Father Pio when she was eighteen months old. On the morning of January 6, 1955 my husband and I were in church attending the Holy Mass and our daughter was at home with her grandfather. There was an accident: she fell into a tub of boiling hot water. She was burned on her stomach and back. The doctor came in an hour and he said, “take your daughter to a hospital immediately because she could die from her wounds”. For this reason he did not give us any medicine. After the doctor left I started to pray for Father Pio’s help. It was nearly noon. As I was getting myself ready to go to the Hospital, my daughter who was alone in the bedroom called me: “Mommy, I don’t have a wound anymore!” “Who has taken your wound?” I asked her out of curiosity. She answered: “Father Pio has come. He took my wounds by putting his whole hand on my burn”. Actually there was no sign of burns on my daughter’s body even though the doctor had told me my daughter was going to die.

In the book of the convent, on the line of October 23rd, 1953, this annotation can be read.

“This morning Miss Amelia Z., a blind girl who was born blind, who is 27 years old, has come from the province of Vicenza (Italy) and she started seeing. She has asked to padre Pio to have her sight after her confession. Padre Pio said: “Be faithful and pray a lot”. In the same moment the young girl saw Padre Pio: the face, the hand, the half gloves that hid the stigmatas. The sight has quickly increased. She informed Padre Pio about the miracle and he said: “We can say thanks to the Lord.” Then the young girl asked the complete sight from Padre Pio and he said: “Step by step and it will come.”

A good woman’s husband was very sick. The woman ran to the convent, but she asked herself, “How do I reach father Pio?”  She had to wait for at least three days if she wanted to meet him for a confession. So during the Mass she stood-up and walked from one side of the Church to the other. Finally, she decided to tell Our Lady what her problem was and asked at the same moment for Padre Pio’s help. After the Mass, she started to move into the Church again, in order to reach Father Pio. Finally, she managed to reach the famous corridor where Father Pio had to pass. As soon as father Pio watched her, he said:“Woman with a little faith, when will you finally ask for my help? Do you think I am deaf? You have already told me it five times when you were in front of me, at my back, on my right and on my left. I understood! I understood! …Go home! Everything is OK.” She went home and found her husband was healed.

The peasants of San Giovanni Rotondo fondly remember the following event. In spring, the almond trees were blossoming and they were promising a good harvest. Butunfortunately millions of voracious caterpillars arrived and devoured the leaves and flowers. They did not spare even the shell. After two days of trying to stop that infestation, the peasants, for whom the almonds were the only economic resource – decided to speak to Father Pio about the problem. Father Pio looked at the trees from the window of the convent and decided to bless them. He put on the sacred vestments and started to pray. When he finished praying he took the holy water and made the sign of the Cross in the air, in the direction of the trees. The next day, the caterpillars had disappeared but the almond trees looked like sticks. It was a disaster: the harvest had been lost.What happened next is incredible! We had the most abundant harvest; a harvest like we had never seen before, but how is it possible that trees without flowers could produce fruits? How was it possible to have fruit from trees that looked like sticks? Scientists have never been able to give any reason for this phenomenon.

In the garden of the convent there were trees; cypresses, some fruit and some pine. Especially on summer afternoons, Father Pio used to stay in the shade together with his friends and guests in order to have a little relief from the hot weather. Once when Father Pio was speaking with some people a large number of birds suddenly started to chirp and make noise from the shade of the trees. The birds had composed a symphony.  Father Pio became annoyed with the symphony so, looking at the birds he said:“Keep silent!” At which point, the birds, the crickets and the cicadas fell silent. The people who were in the garden were greatly astonished! In fact Father Pio had spoken to the birds like Saint Francis