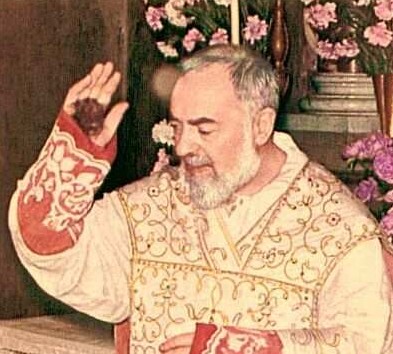 A lot of Saints of the Catholic Church possessed the charisma that allowed them to know distant things, or to view the future, or to see and to sense distance space using their senses and their normal intellectual abilities. Father Pio had the charisma of this supernatural knowledge. Just looking at a person he could see into the most secret parts of his soul. Many testimonies suggest this was the gift of Padre Pio.

One day at sunset, Padre Pio was in the garden of the monastery.  He was chatting pleasantly with some of his spiritual children and others of the faithful, when he realized his handkerchief was missing.  He said to one of those present, “Here is the key to my cell.  Please go there and get me a handkerchief.”  The man went to the cell but besides the handkerchief, he took one of Padre Pio’s half gloves and put it in his pocket.  He could not pass up the opportunity to obtain a relic!  But when he went back to the garden and gave Padre Pio the handkerchief, Padre Pio said to him: “Thanks, but now go back to the cell and put back in the drawer the half glove that you put in your pocket”.

A certain lady used to kneel in front of a photograph of Padre Pio every evening before going to bed to ask his blessing. Her husband, a good Catholic, thought that the gesture was an exaggeration and began laughing and teasing her each time she did so. Once he told Padre Pio about his wife’s habit.  “Every evening my wife kneels in front of your photo and asks you to bless her.”  Padre Pio answered, “I know, I know…and you start laughing.”

Because of the great crowds that went to see Padre Pio, two policemen were assigned to the convent to protect him. One day in the sacristy after the celebration of Mass, while Padre Pio was disrobing the sacred vestments, he turned smiling to one of the policemen and said:  “As soon I have given thanksgiving for the Mass and you are finished here, come to my room because I have to speak to you.”  The policeman was very happy for this invitation so, when he ended his service, he went to Padre Pio’s cell.  Padre Pio told him: “Listen to me!  In not more than eight days you will die at your father’s home, my son.”   The policeman answered him: “But Padre, I am feeling very well.”   But Padre Pio added: “Don’t worry about it! You will be better in eight days. What is this life? A pilgrimage.  We are on a train, my son!   Ask your boss to go on leave to enjoy your family…you are going to die…and your relatives???  They do not know anything about this…”  The policeman, stunned by these words, asked: “Father, can I tell what you have told me?”  “Not for now,” the Father answered, “you can tell it only when you will be at home.”  The young man went to the town of St. Giovanni Rotondo and he asked for permission to go home. His boss did not want to grant him the permission because there was no suitable motivation.  However,  on Padre Pio’s intercession, the policeman received the permission to go home.   When the policeman reached his house, he told his parents: “I’ve come to greet you and Padre Pio has told me that I will die.”  After eight days the policeman died.

A lady said: “I wanted to take part in a trip to St. Giovanni Rotondo, in order to meet and to approach Padre Pio. It was the year 1961. A man in the bus suddenly cried: “My wife wanted me to bring her to this “impostor.” – The reference to the dear Padre Pio was evident, for that insult had struck me to the  heart. When we arrived at St. Giovanni Rotondo, we immediately went to the church to take part in  Holy Mass. At the end of the Mass, Padre Pio came toward us. When he was next to us, he stopped just in front of the gentleman who had insulted him on the bus and said: “Come here! Come to this impostor.”  – The man became pale; he knelt, and stammering, he said: “Forgive me Father! Forgive me!” Then Padre Pio put his hand on his head and, blessing him, added: “Stand up, I forgive you.” That gentleman converted instantly to the delight of all present.