What is a miracle? 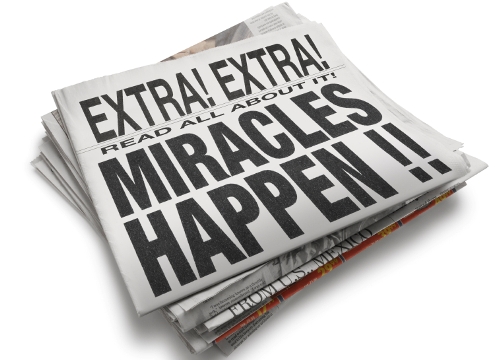 Background: Miraculous Signs?
Let’s start by looking at what the bible tells us about saints and miracles.

So, it is clear that miracles like the countless miracles that Jesus performed were being performed by his apostles (followers and imitators) after his resurrection.

What is a miracle?

First a miracle is a wonderful unexpected supernatural event attributed to divine intervention. It is a perceptible interruption of the laws of nature It is above, contrary to, and outside nature. It is when the impossible happens.

How do you verify a miracle?

The paradox of human miracle assessment is that the only way to discern whether a phenomenon is supernatural is by having trained rationalists testify that it outstrips their training. Since most wonders admitted by the modern church are medical cures, it consults with doctors. The Vatican has access to a pool of 60 covering all the medical branches.

Lourdes Example:  The Lourdes International Medical Committee [CMIL], a consultation committee made up of some 20 permanent members, doctors from hospitals all over Europe, meets once a year to examine the more serious dossiers.

Of some 50 cases reported every year, about five are studying at length. The members of CMIL do the work of experts, which consists of analyzing the information contained in the dossiers.
The scientific aspect must be distinguished from the spiritual. The cure must exceed the known laws of the illness’ evolution, and the person who has experienced the miracle must also recognize the spiritual meaning of the event.
For the cure to be recognized as a miracle, it must fulfill seven criteria established in the 1700s by Pope Benedict XIV.

For this reason, the recognition of a miracle takes several years. Once we have recognized it, the cure is published by the bishop of the diocese where the person resides who experienced the miracle.
For example, Leukemia remissions are not considered until they have lasted a decade. A cure attributable to human effort, however, prayed for, is insufficient. “Sometimes we have cases that you could call exceptional, but that’s not enough.” “Exceptional doesn’t mean inexplicable.”