The Making of a Mystic Nativity 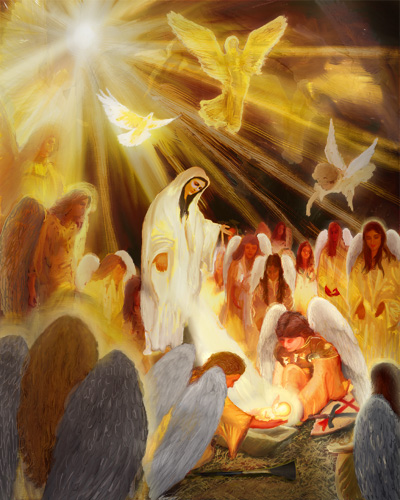 Well it is Christmas time 2014. Although I wanted to have the Nativity painting I started three years ago complete, I’m sad to say it is not. However, I decided I could least share the progress so far. 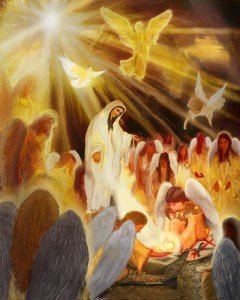 It is not the classic Crèche Nativity of St. Frances origin, but one based on the mystics mind’s eye view. Primarily an image influenced by the Venerable Mary of Agreda (1650), it also has the essence of the Blessed Ann Catherine Emmerich (1800) both who have detailed mystical descriptions of the blessed event.

The scene is set in a cave near Bethlehem.  At the time of Jesus’ birth, according to the mystics, Mary was elevated in a state of ecstasy. Like the Transfiguration that was witnessed on Mt Olive, Christ was transfigured from the Virgin Mary’s womb in a beam of light.

The room was full of a host of Angels and Seraphim. The Holy Spirit represented by the dove was ever-present. God’s Light of Love shone down from above and illuminated the entire cave. 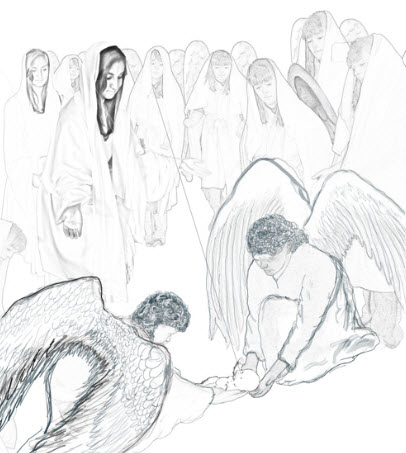 The final picture will ultimately be available on canvas, however rather than using traditional oils to paint the picture I decided to paint it digitally within Photoshop.

Working with actual photos of caves, mangers, wings, I have tried to recreate the scene as accurately as possible.

Using  live models for Mary, the Archangels’, all the Angels  and Seraphim’s. Each Angelic witness has been crafted to portray the immense feeling of joy that must have been in that cave.

Through the prayers of Mary, Jesus and Joseph and with God grace, I hope to have it finished for all by next Christmas.