St Anthony Preaches to the Fish 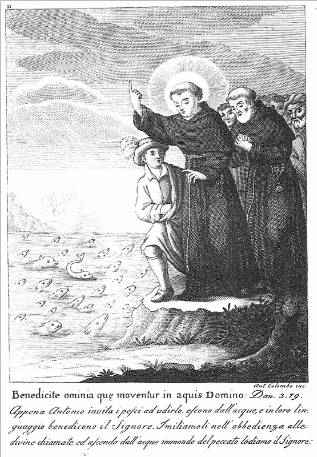 St Anthony Preaches to the Fish (and they listen)

Preached to the  Fish:
In the area near Padua, there was once a group of heretics who criticized and ridiculed his preaching; the Saint went to the edge of a river, looked in the distance, and said to the heretics so that everyone would hear:

“From the moment in which you proved yourselves to be unworthy of the Word of the Lord, look, I turn to the fish, to further confound your disbelief”. He began to preach to the fish, elaborating on their gifts given by God: how God had created them, how He was responsible for the purity of the water and how much freedom He had given them, and how they were able to eat without working. The fish began to gather together to listen to this speech, lifting their heads above the water and looking at him attentively, with their mouths open. As long as it pleased the Saint to talk to them, they stayed there listening attentively, as if they could reason. Nor did their leave their place, until they had received his blessing.

Miracle of the Eucharist and Mule

A mule who was kept fastingfor three days, and refused the oats placed before him. Instead he knelt down in adoration of the Eucharist.
The heretics’ challenge: “Let’s cut the chat and come to the facts. If you, Anthony, can prove with a miracle that in the Eucharist of believers there is, however hidden it may be, the true body of Christ, I will renounce every heresy and submit myself to the Catholic faith”. “I’ll keep my beast of burden locked up for three days and I will starve him. After three days, in the presence of other people, I’ll let him out and I’ll show him some prepared food. You, on the other hand will show him what you believe to be the body of Christ. If the starving animal, ignoring the food, and rushes to adore his God, I will sincerely believe in the faith of the Church”.
The day of the challenge arrived. People arrived from far and wide and filled up the square.  The hungry mule was led out of the stall, and shown appetizing food. St Anthony said to the animal with great faith: “In the name of virtue and the Creator, who I ask you, o beast, and I order to come closer with humility and show your veneration, so that the malevolent heretics will learn from this gesture that every creature is subject to the Lord. St Anthony had hardly finished speaking, when the animal, ignoring the food, knelt down and lowered his head to the floor, thus genuflecting before the living sacrament of the body of Christ.