How to Become a Saint 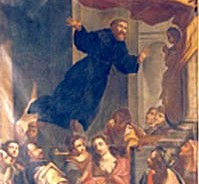 Before I get into what is a saint, and miraculous things common to many saints, I want to be clear why it should be very important to all.

“These people are absolute living and historical proof that by imitating Jesus Christ, the laws of nature can be changed and even wars can be stopped.”  Through their heroic virtues of Christ, they have resurrected the dead, walked on water, levitated above earth, read people’s minds, have been in two places at once, see the future, know the date of their death, and even slowly decay in an odor of roses for centuries after their death.

For me, and I pray for you, these are miraculous signs that God our Father ,Jesus and the Holy Spirit do in fact truly exist, and have given us hope, peace and the key to eternal life.

Let’s go back to the basics and set a foundation for that proof.

Well the word “saint” literally means “holy,” and, in the New Testament, “saint” referred to all who believed in Jesus Christ and followed his teachings. All Christians aspire to become saints, that is, persons in heaven (officially canonized or not), who lived lives of great charity and heroic virtues.
So if all believers are saints, what does the title Saint (St.) mean? Well, a person who has died and has been declared a saint by Canonization.

Let’s look at some attributes that might describe a living Saint:

Saints in general were people who were venerated (respected or honored) after their deaths as saints, usually by the members of their local church or the Christians in the region where they lived, because they were familiar with their good deeds.
Eventually, the Catholic Church created a process, called “canonization,” through which such venerable people could be recognized as saints by all Christians everywhere.
Catholics believe that both types of saints (canonized and acclaimed) are already in Heaven, which is why one of the requirements for the canonization process is proof of miracles performed by the possible saintafter his death.

Let me state this in another way: The “to be canonized” Saint who is in Heaven answers someone’s prayer for a miracle, and that miracle (usually medical) is certified by a team of doctors thus confirming His or Her existence in Heaven. At least two of these miracles must be certified.
Let’s look at a few attributes of a Canonized Saint: (See process of Sainthood) (typically 50-500 years)

Canonized saints can be venerated anywhere and prayed to publicly, and their lives are held up to Christians still struggling here on earth as examples to be imitated.

The point here is The Roman Catholic canonization processes is done with extreme diligence and care and I believe far exceeds the burden of proof used in any courtroom.