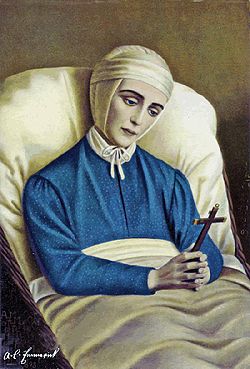 When Mary told Joseph that her time was drawing near and that he should now betake himself to prayer, he left her and turned toward his sleeping place to do her bidding. Before entering his little recess, he looked back once toward the part of the cave where Mary knelt upon her couch in prayer, her back toward her facing the east. He saw the cave filled with light that streamed from Mary, for she was entirely enveloped as if by flames.

He sank prostrate to the ground in prayer and looked not back again. The glory around Mary became brighter and brighter.

At the twelve-hour her prayer became ecstatic, and I saw her raised so far above the ground that one could see it beneath her.

I no longer saw the roof of the cave. Above Mary stretched a pathway of light up to the heavens in which pathway it seemed as if the light came forth from another as if one figure dissolved into another, and from these different spheres of light other heavenly figures issued.