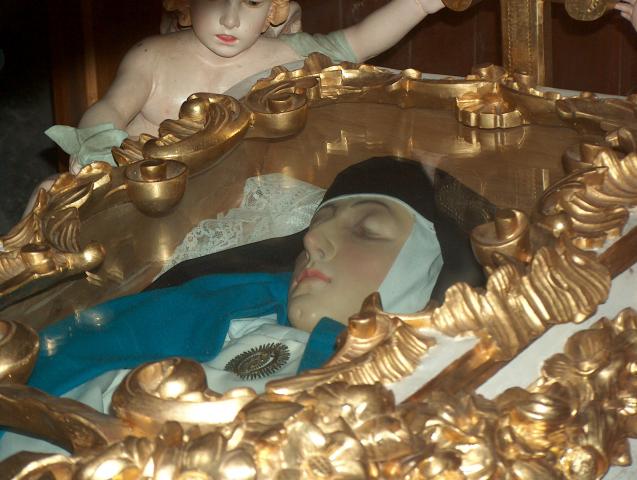 A Vision of Venerable Mary of Agreda

After their supper they gave thanks to the Lord as was their custom. Having spent a short time in this prayer and conferring about the mysteries of the incarnate Word, the most prudent Virgin felt the approach of the most blessed Birth. She requested her spouse saint Joseph to betake himself to rest and sleep as the night was already far advanced. Leaving most holy Mary in the portion of the cave thus furnished, saint Joseph retired to a corner of the entrance, where he began to pray.

He was immediately visited by the divine Spirit and felt a most sweet and extraordinary influence, by which he was wrapt and elevated into an ecstasy. In it was shown him all that passed during that night in this blessed cave; for he did not return to consciousness until his heavenly Spouse called him.

The Queen of all creatures was called from her resting-place by a loud voice of the Most High, which strongly and sweetly raised Her above all created things and caused Her to feel new effects of divine power; for this was one of the most singular and admirable ecstasies of her most holy life.

The Most High announced to his Virgin Mother, that the time of his coming into the world had arrived and what would be the manner in which this was now to be fulfilled and executed.

She prostrated Herself before the throne of his Divinity and gave Him glory, magnificence, thanks and praise for Herself and for all creatures, such as was befitting the ineffable mercy and condescension of his divine love.

At the same time She asked of the divine Majesty new light and grace in order to be able worthily to undertake the service and worship and the rearing up of the Word made flesh, whom She was to bear in Her arms and nourish with her virginal milk.

The most holy Mary remained in this ecstasy and beatific vision for over an hour immediately preceding her divine delivery.

At the moment when She issued from it and regained the use of her senses She felt and saw that the body of the infant God began to move in her virginal womb; how, releasing and freeing Himself from the place which in the course of nature He had occupied for nine months, He now prepared to issue forth from that sacred bridal chamber.

This movement not only did not cause any pain or hardship, as happens with the other daughters of Adam and Eve in their childbirths; but filled Her with incomparable joy and delight, causing in her soul and in her virginal body such exalted and divine effects that they exceed all thoughts of men.

Her body became so spiritualized with the beauty of heaven that She seemed no more a human and earthly creature. Her countenance emitted rays of light, like a sun incarnadined, and shone in indescribable earnestness and majesty, all inflamed with fervent love.

She was kneeling in the manger, her eyes raised to heaven, her hands joined and folded at her breast, her soul wrapped in the Divinity and She herself was entirely deified.

In this position, and at the end of the heavenly rapture, the most exalted Lady gave to the world the Onlybegotten of the Father and her own, our Savior Jesus, true God and man, at the hour of midnight, on a Sunday, in the year of the creation of the world five thousand one hundred and ninety-nine (5199), which is the date given in the Roman Church, and which date has been manifested to me as the true and certain one.

At the end of the beatific rapture and vision of the Mother ever Virgin, which I have described above, was born the Sun of Justice, the Onlybegotten of the eternal Father and of Mary most pure, beautiful, refulgent and immaculate, leaving Her untouched in her virginal integrityand purity and making Her more godlike and forever sacred; for He did not divide, but penetrated the virginal chamber as the rays of the sun penetrate the crystal shrine, lighting it up in prismatic beauty.

The infant God therefore was brought forth from the virginal chamber unencumbered by any corporeal material substance foreign to Himself.

But He came forth glorious and transfigured for the divine infinite wisdom decreed and ordained that the glory of his most holy soul should in his Birth overflow and communicate itself to his body, participating in the gifts of glory in the same way as happened afterwards in his Transfiguration on mount Tabor in the presence of the Apostles (Matth. 17, 2).

This miracle was not necessary in order to penetrate the virginal enclosure and to leave unimpaired the virginal integrity; for without this Transfiguration God could have brought this about by other miracles.

The sacred evangelist Luke tells us that the Mother Virgin, having brought forth her firstbegotten Son, wrapped Him in swathing clothes and placed Him in a manger.

He does not say that She received Him in her arms from her virginal womb; for this did not pertain to the purpose of his narrative.

But the two sovereign princes, saint Michael and saint Gabriel, were the assistants of the Virgin on this occasion.

They stood by at proper distance in human corporeal forms at the moment when the incarnate Word, penetrating the virginal chamber by divine power, issued forth to the light, and they received Him in their hands with ineffable reverence.

In the same manner as a priest exhibits the sacred host to the people for adoration, so these two celestial ministers presented to the divine Mother her glorious and refulgent Son.

All this happened in a short space of time. In the same moment in which the holy angels thus presented the divine Child to his Mother, both Son and Mother looked upon each other, and in this look, She wounded with love the sweet Infant and was at the same time exalted and transformed in Him.

From the arms of the holy princes the Prince of all the heavens spoke to his holy Mother:“Mother, become like unto Me, since on this day, for the human existence, which thou hast today given Me, I will give thee another more exalted existence in grace, assimilating thy existence as a mere creature to the likeness of Me, who am God and Man.”

The most prudent Mother answered : “Trahe me post Te, curremus in odorem unguentorum tuorum” (Cant. 1, 3). Raise me, elevate me, Lord, and I will run after Thee in the odor of thy ointments.

Holding Him in Her arms She thus served as the altar and the sanctuary, where the ten thousand angels adored in visible human forms their Creator incarnate.

And as the most blessed Trinity assisted in an especial manner at the birth of the Word, heaven was as it were emptied of its inhabitants, for the whole heavenly court had betaken itself to that blessed cave of Bethlehem and was adoring the Creator in his garb and habit of a pilgrim (Phil. 2, 7).

And in their concert of praise the holy angels intoned the new canticle: “Gloria in excelsis Deo, et in terra pax hominibus bonae voluntatis” (Luke 2, 14). In sweetest and sonorous harmony they repeated it, transfixed in wonder at the new miracles then being fulfilled and at the unspeakable prudence, grace, humility and beauty of that tender Maiden of fifteen years, who had become the worthy Trustee and Minister of such vast and magnificent sacraments.