By natural reason man can know God with certainty, on the basis of his works. But there is another order of knowledge, which man cannot possibly arrive at by his own powers: the order of divine Revelation. Through an utterly free decision, God has revealed himself and given himself to man. This he does by revealing the mystery, his plan of loving goodness, formed from all eternity in Christ, for the benefit of all men. God has fully revealed this plan by sending us his beloved Son, our Lord Jesus Christ, and the Holy Spirit.

THE STAGES OF REVELATION

The Fall (Adam and Eve)

The LORD God gave man this order: “You are free to eat from any of the trees of the garden except the tree of knowledge of good and bad. From that tree you shall not eat; the moment you eat from it you are surely doomed to die.” (Gen 2:17)

But the serpent said to the woman: “You certainly will not die!  No, God knows well that the moment you eat of it your eyes will be opened and you will be like gods who know what is good and what is bad.” (Gen 3:4).

God manifested himself to our first parents, spoke to them and, after the fall, promised them salvation (cf. Gen 3:15) and offered them his covenant.

The Covenant with Noah 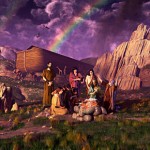 After the unity of the human race was shattered by sin God at once sought to save humanity part by part. The covenant with Noah after the flood: “Thus I establish My covenant with you: Never again shall all flesh be cut off by the waters of the flood; never again shall there be a flood to destroy the earth.” It will remain in force as long as the world lasts.

In order to gather together scattered humanity God calls Abram from his country, his kindred and his father’s house, and makes him Abraham, that is, “the father of a multitude of nations”. “In you all the nations of the earth shall be blessed.”

”On that day the LORD made a covenant with Abram and said, “To your descendants I give this land, from the Wadi of Egypt to the great river, the Euphrates— the land of the Kenites, Kenizzites, Kadmonites, Hittites, Perizzites, Rephaites,  Amorites, Canaanites, Girgashites and Jebusites.” (Genesis 15:18-21NIV)
God forms his people Israel

God chose Abraham and made a covenant with him and his descendants. By the covenant God formed his people and revealed his law to them through Moses. Through the prophets, he prepared them to accept the salvation destined for all humanity. God formed Israel as his people by freeing them from slavery in Egypt. He established with them the covenant of Mount Sinai and, through Moses, gave them his law. (The Ten Commandments)

Through the prophets, God forms his people in the hope of salvation, in the expectation of a new and everlasting Covenant intended for all, to be written on their hearts.

CHRIST JESUS “MEDIATOR AND FULLNESS OF ALL REVELATION”

God has said everything in his Word

Son, in whom he has established his covenant forever. The Son is his Father’s definitive Word; so there will be no further Revelation after him.
By love, God has revealed himself and given himself to man. He has thus provided the definitive, superabundant answer to the questions that man asks himself about the meaning and purpose of his life.

If you understand that God has been revealing his plan to humanity then click here to learn more about God’s only Son Jesus Christ Divinity.