This page contains several different views of the answer. There are entire books written on this topic, so to keep it to the point I have included only pertinent facts. Because there are many sides to the topic, from personal opinions to official declarations, and even unprecedented procedures by the Catholic Church (as far as apparitions are concerned, it can get confusing. So I have prepared a time-line chart of major points to hopefully make it clearer to those who ask the question Click here to download a PDF file of the chart. 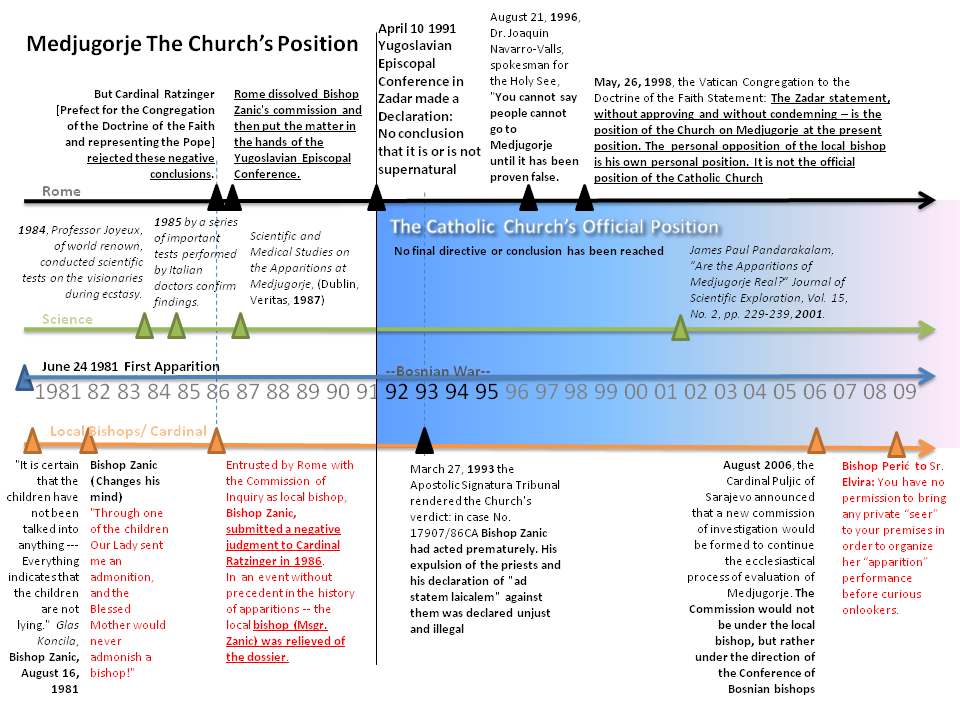 Or click the picture to see a larger image. I can personally testify that there is a strong sense of the Holy Spirit emanating from this little village. I believe that the Mother of Jesus is strongly present here as well as the Evil One. From Dr. Mark Miravalle Medjugorje Conference Notre Dame University May, 2006.

What is the official position of the Church regarding Medjugorje?

Would it be an act of disobedience to pilgrimage to Medjugorje before the Church has given the apparitions final and definitive approval?

Is there acts of disobedience by the Franciscan priests at St. James parish in Medjugorje against their local bishop?

Can these apparitions really be true when they’ve been reportedly happening for so long?

Do the messages reported by the visionaries contain false teachings regarding ecumenism which contradicts the official teachings of the Catholic Church’s magisterium?

Medjugorje, What Does the Church Say?

Written by Sr. Emmanuel and Denis Nolan After having given his support to the testimony of the six visionaries at the beginning of the apparitions (“It is certain that the children have not been talked into anything — Everything indicates that the children are not lying.”  Glas Koncila, August 16, 1981), Bishop Zanic, the Bishop of Mostar, changed his mind and denied their authenticity.   Entrusted by Rome with the Commission of Inquiry as local bishop, he submitted a negative judgment to Cardinal Ratzinger in 1986.  This judgment was printed in the newspapers and many Christians, even among the clergy, have not received further information. But Cardinal Ratzinger [Prefect for the Congregation of the Doctrine of the Faith and representing the Pope] rejected these negative conclusions.  And — an event without precedent in the history of apparitions — the local bishop (Msgr. Zanic) was relieved of the dossier.  This fact was not widely reported.  Rome dissolved Bishop Zanic’s commission and then put the matter in the hands of the Yugoslavian Episcopal Conference.  A new commission was consequently appointed under the presidency of Bishop Komarica (of Banja Luka, Bosnia-Hercegovina). In 1984 – 85, Professor Joyeux, of world renown, conducted scientific tests on the visionaries during ecstasy.  His research, presented with Fr. Rene Laurentin in Scientific and Medical Studies on the Apparitions at Medjugorje, (Dublin, Veritas, 1987) discarded definitively the thesis of deceit on the part of the visionaries, as well as that of their psychological diequilibrium. With the responsibility and authority as President of the Bishops’ conference, Cardinal Kuharic said with regard to the Declaration of Zadar:“After three years of study conducted by the appropriate Commission, we Bishops have accepted Medjugorje as a place of prayer, as a sanctuary — With regard to the supernatural factor of the apparitions, we have said that for now we cannot affirm that it exists — We therefore leave this aspect for further investigation.  The Church is in no hurry,”.  (Glas Koncila, August, 1993) On August 21, 1996, Dr. Joaquin Navarro-Valls, spokesman for the Holy See, instructed the Catholic News Service; “You cannot say people cannot go [to Medjugorje] until it has been proven false. This has not been said, so anyone can go if they want.” “In addition,” clarified a CNS report issued later that day, “when Catholic faithful go anywhere, they are entitled to spiritual care, so the church does not forbid priests to accompany lay-organized trips to Medjugorje in Bosnia-Hercegovina. Navarro-Valls insisted ‘nothing has changed’ regarding the Vatican’s position on Medjugorje — ‘Has the church or the Vatican said no (to Catholics visiting Medjugorje)? No!'” (CNS News Release, August 21, 1996) On March 22, 1995, Archbishop Frane Franic, Ordinary at the time of the Metropolitan See that in 1981 included Medjugorje, informed Sr. Emmanuel and Denis Nolan that at a meeting of the BYC (Bishops/ Conference of Yugoslavia) held soon after Bishop Zanic had changed his mind, he explained before the Bishops’ Conference why he had done so.“Through one of the children Our Lady sent me an admonition, and the Blessed Mother would never admonish a bishop!” The Conference granted Bishop Zanic’s request, and Archbishop Franic’s response, “But in the Book of the Apocalypse [Revelation] the Holy Spirit admonishes seven Bishops,” was not recorded in the minutes of their meeting. Diocesan and Parish records confirm that in 1981, Vicka Ivankovic, one of the visionaries in Medjugorje, relayed to the Bishop – in regard to his treatment of two Franciscan priests, Fr. Vego and Fr. Prusian – who had appealed their case to Our Lady through the visionaries: “The Gospa wants it said to the bishop that he has made a premature decision. Let him reflect again, and listen well to both parties he must be just and patient. She says that both priests are not guilty, ” (Parish Chronicle, p43). (The bishop had severly disciplined the priests for having administered the sacraments to Catholics who had chosen to attend Mass in their Franciscan chapel in Mostar instead of the church in Mostar he had taken from the Franciscans and given to the secular clergy as part of his Cathedral parish.) “This support given against the authority of the Church,” Bishop Zanic declared at that time, “proves that it is not the Virgin!” On March 27, 1993 – more than 10 years later – the highest Tribunal of the Holy See (the Apostolic Signatura Tribunal) rendered the Church’s verdict: in case No. 17907/86CA Bishop Zanic had acted prematurely. His expulsion of the priests and his declaration of “ad statem laicalem” against them was declared unjust and illegal, (Mir i Dobro, No. 2, 1993)